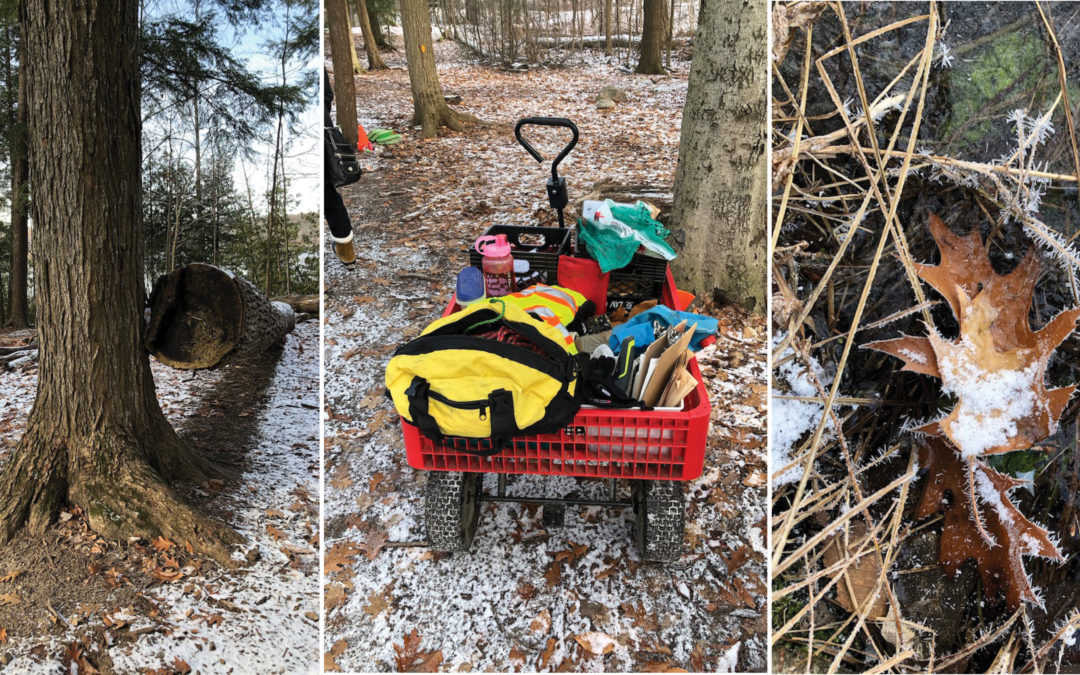 Last month I wrote about Risky Play and the great possibilities available to both parents and teachers to let our youngest citizens explore the world with fewer boundaries and rules. This month Atelier Kids takes a look at what is possible when the playground is the forest and all it has to offer.

In early December, the Atelier Kids Leadership Team had the great pleasure of visiting KOLTS Forest School. Located in King City, KOLTS is King Observation Lab Teaching School and is part of Seneca College. Louise Jupp, Pedagogista, met us and guided our visit while sharing her deep knowledge of both Reggio and outdoor learning.

As we arrived, the children and teachers were already dressed head to toe in winter friendly gear: waterproof and warm boots, mitts and snowsuits. Little did we know how important the “waterproof” part of this clothing would become! We followed their little feet out through the back garden, along the path and down into the shady forest alongside the lake. The children settled onto logs circling a fire pit and their lead teacher began a discussion about what lay ahead. The children reflected on their day so far and expressed their feelings and wishes for their forest exploration time.

Our Atelier Kids Team watched and listened as the children put forward their own theories about what they would find:

“It is very cold today. I want to see the puddles. I think they will be hard.”

“I want to bang them to see if they will break.”

“I feel excited about being in the forest.”

They also set limits for themselves by asking teachers to accompany them, breaking up into small groups and choosing where they were comfortable exploring: the frozen puddles, but not the big climbing log because, as the children had already noted, it was covered in snow and would be slippery.

When all the children had moved out to explore, accompanied in small groups by educators, we came across two groups. One had found ice along the edge of the lake, with grasses and trees poking through. They had one shovel and several sticks and were actively banging the ice until it broke and water came up. We watched as they screamed with delight, “It’s breaking! I found water! Look!” In any traditional setting you would expect teachers to be warning the children to avoid the water, the edge of the lake and the potential for danger. But in this case the teacher accompanying this group just watched and continued to ask the children questions about their findings; a very Reggio-inspired approach to engaging with the children. When a problem broke out about sharing the shovel, it was redirected to the group to figure out a solution…and they did, with calm voices and reasoning gently supported by an educator.

The next group we came across was climbing up and sliding down and rather steep, root-filled embankment just behind the ice-breakers. Remembering that these children were 2, 3 and 4 years old is important. There was great potential for any child to tumble or fall, yet, none did. The ones who attempted to climb but did not feel comfortable simply didn’t continue. They went on to look for another area to explore. The ones who did moved slowly, calculating their hand- and footholds carefully, then sliding back down to begin again. Staff didn’t hold them, warn them or prevent them from pursuing their challenge; they just observed and assisted with discussion when needed.

After a beautiful walk with Louise of about one km, looking at all the areas available for the children to explore through the seasons, the Atelier Kids Team returned to find the children again seated around the fire pit and starting on a small snack. They shared their observations and experiences, and were prompted to use precise language when they did: “Good” became “I liked seeing the water under the ice when I broke it.” They then discussed which children wanted to return to the school and which ones wanted to stay in the forest. Once all was settled, everyone sang a goodbye song to the forest, incorporating indigenous traditions and language. It felt as if the forest was a playmate the children loved and were thankful to have spent the morning with.

Overall, as Reggio-inspired educators, our Atelier Kids Team appreciated how the forest setting and the attitudes of the teachers helped the children:

But above all, we loved seeing risky play in action. Watching children truly in charge of their adventure and in absolute wonder at the world around them was a delight. We can’t wait to bring a little bit of forest school to your children at Atelier Kids Early Learning & Care during our explorations of neighbouring High Park. Until then, we encourage you to get outside anywhere you can, listen to your children’s wonder, and see the beauty of the natural world around us.